Vodafone is a proud winner of bePROUD Awards

On the occasion of the International Day Against Homophobia, bePROUD Awards were presented during a ceremony on 17th May.

The awards were divided into five categories. The award for the Employer of the Year went to Vodafone. “Vodafone is one of a few companies which have their own document defining the rights and the solving of problems of people from the LGBT community. The employee benefits are available to LGBT parents, too. On the whole, the company displays a high-standard approach to the LGBT community, based on the cooperation with their branches abroad and on using their positive example and experience,” said the jury to explain their decision. The award was handed over by Martina Štěpánková, Deputy Minister and Director of Division for Human Rights at the Office of the Czech Government, to Jana Vychroňová, HR Business Partner at Vodafone. 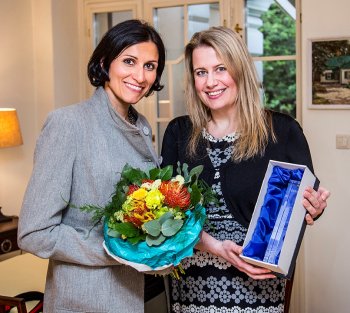 The ceremony was organized by bePROUD – Platform for Equality, Recognition and Diversity in cooperation with the Embassy of the Netherlands in the Czech Republic. The event was held at the residence of the Ambassador, His Excellency Eduard W. M. V. Hoekse, in Prague.